The Hinckley Chamber of Commerce was organized in 1949, formal incorporation took place on April 23, 1951.  Formation of a Chamber in Hinckley was brought about by many issues and problems that caused concern among the the township residents.  Among the problems were poor and inadequate telephone service, zoning issues, consolidation of school districts, Greyhound bus service through Hinckley and, of course, differences of political opinion.

M.J. Vargo was elected the Chamber’s first president.  Others who were active in helping Mickey form the new Chamber were Joe Gedeon, Lee Casterline and many others.  Membership that first year swelled to 135 – interest in township issues was high and many citizens were eager to become a part of the new organization. 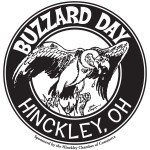 The Story of the Buzzard Logo

Hinckley Chamber of Commerce obtained its distinctive logo thanks to the promotional efforts of former Chamber members and Buzzard Day founders, John Wiszt and Ed Spatz.

“We’d do anything we could to promote the buzzards,” John said.  “One time a bunch of us were sitting in my dining room on Bellus Road and Ed Spatz asked if he could use my telephone, I said ‘Sure’, and he called Al Capp in Boston. Li’l Abner was a big thing then and Ed talked to Capp.  He (Capp) said he’d have something about the buzzards in Dogpatch and drew us a buzzard with his special permission to use it.”

Capp charged “not a cent” to design the logo and went on to mention Buzzard Day in the Li’l Abner comic strip a couple of times.  Al Capp’s Buzzard has become the official logo of the Hinckley Chamber of Commerce and is used on souvenirs and promotional materials for this event.